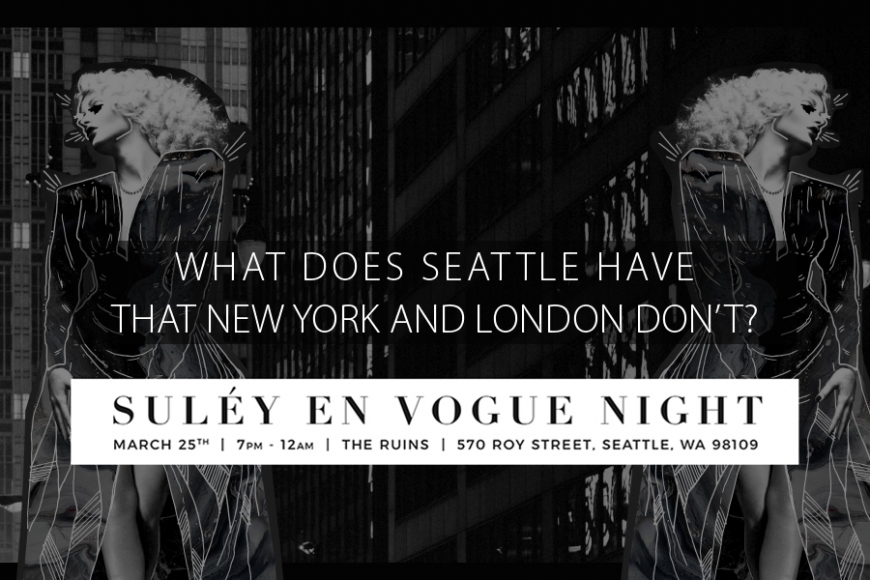 Seattle, Washington (November 27st, 2017) - SULÉY en Vogue Night event series was launched in 2016 at a historical Sorrento Hotel and it became extremely popular, making it the hottest and most upscale networking party night in Seattle.

Join us to celebrate this Holiday season, have fabulous evening with amazing, like-minded people who love to get dressed up en vogue, connect, and have fun. SULÉY en Vogue Night will bring you a sensual experience and vibrant atmosphere of bohemian lifestyle, great conversations, creative performances, and opportunity to make new connections.

What:   SULÉY en Vogue Night
When:  December 21, 2017 at 7 PM - Midnight
Where: The Tin Lizzie Lounge at MarQueen Hotel that is located in the lively center of Lower Queen Anne, just North of Seattle Center
Attire:  Dress fashionably with a rock-&-roll attitude.

Our goal is to bring people like ourselves together so that we can have a freedom and place to express ourselves, our fashion tastes, the music we listen to, the art, film, and culture that we enjoy and value. Our friends artists, musicians, DJs locally and around the world will appear to perform at the SULÉY en Vogue nights and parties. We want these artists to share their talent and vision with SULÉY en Vogue guests and patrons. SULÉY en Vogue will be a place in the city where it will not be about being serious, but about dressing up, getting drunk and simply having a laugh with your friends. It will be a place with the feel of a British Pub Culture vs the glamour and recklessness of Studio 54. No limits, everything allowed, no VIP area, everyone is special, everyone has a right to fun, to party and to meet new people!

This classic brick building is characteristic of the architectural beauty the Queen Anne neighborhood exhibits. Enter through the beveled glass doors to our European inspired lobby with Alaskan marble and terrazzo floors where then a grand staircase leads to your inviting room.

Built in 1918 as the Seattle Engineering School, it was used to retrain blacksmiths to work at the Ford assembly plant on Lake Union. In 1920, the school opened the Kuay (say "Q.A") training garage (later named the MarQueen Garage, and currently 10 Mercer Restaurant) which was then considered the largest single garage in the city. The building operated as a school and a working garage for more than 50 years.

I want to know more about SULÉY en VOGUE NIGHT

Answer: It is an event series. SULÉY en Vogue Night series is a part of SULÉY ERA program. It is a network and socializing night out, a fashionable event to show off.

A: SULÉY ERA concept is global. Since it is based in Seattle, it is a great opportunity for the city to show the world what Seattle has become and where it is moving, so people understand why Seattle is Number one fastest growing city in the nation, and why people from New York, Silicon Valley, LA are moving in.

SULÉY ERA promotes a vibrant, high energy, high achievement life style. Seattle needs to define its new lifestyle that would be attractive to the most progressive and creative people around the world. SULÉY en Vogue Night is part of this "life style" building activities that SULÉY ERA is doing for Seattle.

Q: How will networking at the party be facilitated?

A: SULÉY en Vogue Night provides a non formal relaxing and entertaining atmosphere for people to meet and get to know each other. We select our network very carefully to promote and invite only like-minded people who are educated, creative and driven to success.

Q:  How would SULÉY en Vogue Night benefit me?

A: It is emotionally charged event,  and it gives an opportunity to any guest to spend a great night among like-minded people ad express yourself.

Q: How do I access the CLUB SULÉY Network?

A: Become a CLUB SULÉY member on a private Facebook group, and add your won friends and contacts to grow the network. The Facebook link to CLUB SULÉY: https://www.facebook.com/groups/ClubSULÉY/

Make sure you enter all the required information, indicated by an asterisk (*). HTML code is not allowed.

SULÉY ERA is a global platform positioned as a leader in business and creative landscape, expressing opinions of like-minded people in fashion, art, culture, business, lifestyle, and leadership.