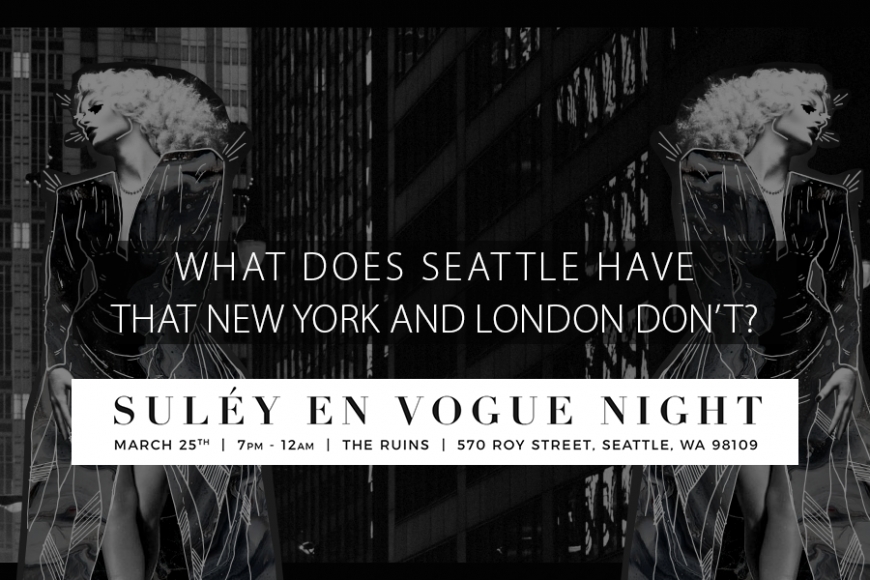 Seattle, Washington (March 1st, 2017) - SULEY ERA opens the 2017 season with their fifth SULEY en Vogue Night on March 25th, an event for influencers in technology, fashion, music, art, film and entrepreneurship. The SULEY en Vogue Nights of the year 2017 will be held at the exquisite luxury private club, The Ruins in Seattle.

After successfully launching four SULEY en Vogue Nights in 2016, multimedia promotional platform SULEY ERA is bringing together the city’s creative and influential people in various creative and innovative industries to connect with like-minded professionals and artists.

With the current and promising growth of Seattle’s latest developments, there has been a great need for a network and place to bring together this town’s talent and give them an opportunity to build new ventures. On March 25th, SULEY en Vogue will be the place for conversations, drinks, and entertainment by local and internationally renowned performers.

The vibrant and decadence atmosphere of the beautiful event space The Ruins, filled with entertainment, music, and creative charms will make this evening a very unique and truly the most glamorous and hottest night in town.

“It is time to stop being known as ‘Sleepless in Seattle’ and become known as ‘Hottest in Seattle’”, says founder of SULEY ERA, Yuliya Suleymanova who has ambitious global plans for SULEY ERA such as giving an opportunity for creatives and technology professionals to unite on projects, events and other various campaigns. SULEY ERA is a platform that caters to many industries and allows businesses and individuals to reach levels they have never expected or hoped to achieve.

Determined to create a community of creatives and entrepreneurs who respect each other's craft and believe that working together is the best way to thrive, SULEY en Vogue Night has already caught the attention of the city’s most influential entrepreneurs, designers, artists, producers, directors, and alike.

ABOUT SULEY ERA & SULEY an Vogue Nights
SULEY ERA is a multimedia promotional platform for ambitious and talented individuals in fashion, film, music, arts and entrepreneurship.

SULEY en Vogue Night is a series of entertainment and networking events that are produced in partnership with The Ruins.

ABOUT THE RUINS
Founded in 1993 by internationally and Seattle-renowned caterer Joseph McDonnal, The Ruins is known as “Seattle’s Best Kept Secret” with unique and elegant rooms, historic themed decor and a magical sense of extravagance.

Tickets are limited and are available for purchase here.

More in this category: « FASHION LAB, the most progressive cross-industry networking event was introduced on the evening of January 31, 2017. SULÉY en Vogue Night - Year End Celebration »

Make sure you enter all the required information, indicated by an asterisk (*). HTML code is not allowed.

SULÉY ERA is a global platform positioned as a leader in business and creative landscape, expressing opinions of like-minded people in fashion, art, culture, business, lifestyle, and leadership.